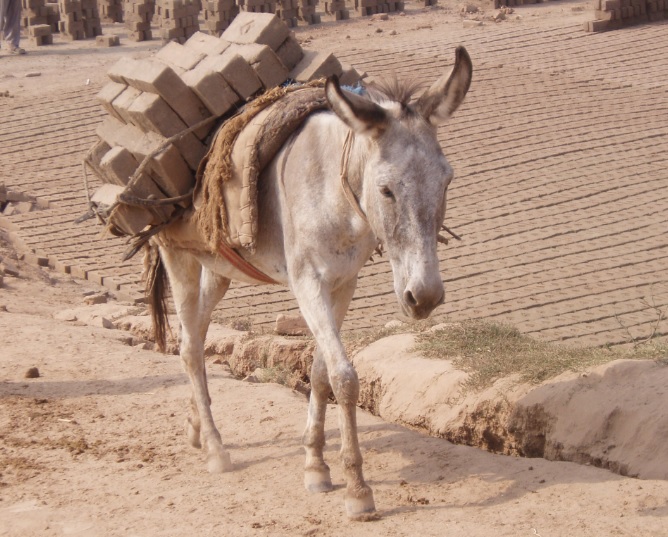 Brooke Hospital for Animals is an international animal welfare charity working to improve the lives of working horses, donkeys, mules.

It is difficult to imagine the working conditions and hardships most draught animals in countries like Egypt and India have to endure. In addition to the discomforts caused by their usually meager diets, many animals have to work for long hours in temperatures well over 100 degrees Fahrenheit with little opportunity of water or a rest in the shade. The owners of the draught animals are, for the most part, very poor and so have the greatest difficulty in feeding and maintaining their families. Their animals are their only means of livelihood and when these become old, lame or involved in an accident, most owners simply cannot afford to replace their animal while it has even the most limited capacity to work. This process benefits nobody. Impoverished owners have to manage with half a bread winner; the suffering of the animals, working for years with crippling injuries or diseases, cannot even be imagined.

Brooke Hospital for Animals helps to improve the condition and well-being of these working equines through:

-      Providing free veterinary service, in static clinics and with mobile clinics
-      Preventing diseases by educating the owners and users in the basic principles of equine care

Dorothy Brooke arrived in Cairo in October 1930. Twelve years earlier, at the end of the First World War, the British government had, tragically sold some twenty thousand cavalry horses to buyers in Egypt. Mrs. Brooke was so shocked by the condition of the surviving horses she saw working in the streets of Cairo that she at once set about putting an end to their suffering. Her letter to the British newspaper the ‘Morning Post’ raised the modern-day equivalent of more than 20.000 Pounds. Within three years, she had bought the remaining 5000 cavalry horses still working in Egypt. The vast majority, being more than 20 years old and often in the final stages of collapse, had to be humanely put down. However, the animals ended their days peacefully amid the care and attention to which they were all once so accustomed. Deeply moved by the plight of the working equines in Egypt, Dorothy decided to use the facilities that she had created for the old war horses. She provided a free veterinary clinic to which owners, normally unable to afford treatment, could bring their horses and donkeys. Since then, the Brooke Hospital has expanded its valuable work to more countries (a.o. India and Pakistan) and has helped literally millions of animals.

Much of our work is done in cities and country markets or in the animals’ work places such as the brick kilns in Egypt. This allows our vets and educational staff to educate large numbers of owners and users in the basics of animal welfare and in the great importance of early treatment of diseases. We visit schools and educate school children in proper animal care; we convey our equine welfare message through educational programs for adults. We also encourage good animal husbandry through positive initiatives, like the Healthy Donkey/Horse Good Owner Competitions.
Gradually the owners come to realise that it is in their own interest to care for their animals in the ways we advise. Evidence of our success can be seen in the improved condition of draught animals in the areas in which we operate. Constant attention is paid to effectively measure the impact of our work. 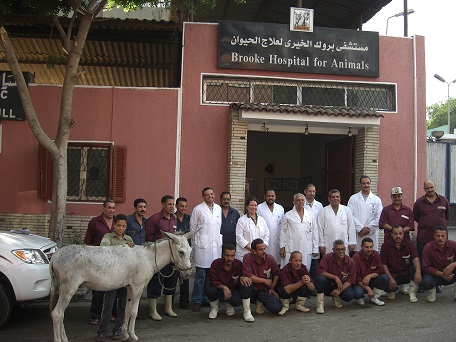 The Head Office and main clinic of Brooke Hospital for Animals Egypt is still situated today on the location of Dorothy Brooke’s hospital for old war horses. Brooke Hospital for Animals Egypt has 6 static clinics, in Cairo (1934), Alexandria (1961), Luxor (1966), Edfu (1992), Aswan (1998) and Mersa Matrouh (2000) and it has an office in Mansoura (2006), which is the station for three mobile clinics. Brooke Hospital Egypt treats around 160.000 horses, donkeys and mules each year. But the need is still enormous. There are an estimated 1.7 million working horses and donkeys in Egypt and there are still many regions where the help of the Brooke Egypt teams is needed.

By supporting Brooke Hospital for Animals, you contribute to a better future for the working equines.

For more information on how to make a donation please click here.